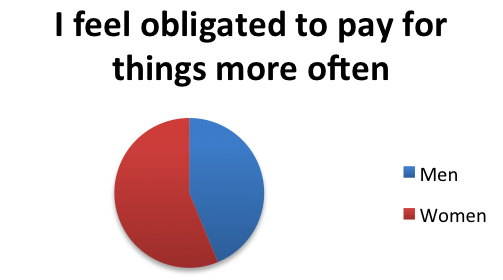 
Women also revealed that they believe that had they not given up work for childcare, they would be the highest earner. In relationships where the woman was the breadwinner, 21% of them had left work in favour of being a full-time parent. One in five of the 21% were unhappy about earning more than their husband as it raised difficulties when leaving work to care for children – the responsibility of earning more money being cited as the main reason for unhappiness. 5% of the women in the survey confessed to feeling that, at least on occasion, they felt their partner should have given up work instead of them.
One in twelve men said they had either reduced their hours or stopped working to care for children – something that was echoed by nearly 50% of the women respondents. A possible reason for this would be that male breadwinners, on average, earn more than their female counterparts. When the woman was the breadwinner, they earned between £10,001 and £12,500 more than their partner, whereas male breadwinners earned between £20,001 and £30,000 more than their female partner.


The charts show how many people responded that their partner earns more than them, and how much more per year before tax. The longest lines show the most popular answers.
Age seemingly plays a factor in who the breadwinner is, with only 42% of respondents between 20-29 years old saying they are the main earner yet 73% of those 70+ saying they earned the most in their family. This could be due to retirement, or that in today’s job markets there is no substitute for experience. The South East has the most disparity between partners, with 10% of people in the South East earning more than £50,000 less than their partner.
This guest blog was provided by Nutmeg
Jenny Garrett is the Executive Coach and founder of Reflexion Associates, a leadership and coaching consultancy. She’s also the author of Rocking Your Role, a how-to guide to success for female breadwinners.